Bep Schrammeijer is a PhD researcher at the Institute for Environmental Studies (IVM) of the Vrije Universiteit (VU) Amsterdam.

Bep’s PhD project is about finding out how to measure public values of green space. These values are subjective and difficult to measure, therefore they are often left out of the planning process. Green spaces in the city are a hot topic at the moment. City residents, planners, architects, scientists, psychologists, doctors, ecologists and engineers are all talking about the importance of vegetation in the city to provide what is now called ‘nature-based solutions’. Vegetation in the city provides many functions that are important in a liveable and sustainable city. Despite this the discussion is usually focussed on very physical and measurable functions, like capturing carbon, providing habitats for bees or birds or reducing the impact of heavy rainfall. More social, and subjective, functions are often overlooked, or lumped together into the generic function ‘recreation’ because they are so difficult to measure and give a monetary value. Especially since the outbreak of Corona we have seen how important green spaces are for people for escape, relaxation, play and sport.

Bep’s research is focussed on trying different ways to get more information about these types of functions and values of green space so that they can be better included in the decision making process. This involves testing methods of asking people, this can be called public participation, crowdsourcing, crowdsensing or citizen science.

In 2018 Bep tested the use of a dedicated mobile app to gather information while people are actually in the park with a pilot in the Rembrandtpark (the Mijn Park app). The app was useful, but also had some drawbacks – mainly that it is not very flexible or adaptable to another situation. Now we are trying out a ‘spatial online survey’ which is much more flexible for us in making it, but also for you when filling it in.

Two Master’s students are helping Bep out and have their own subprojects:

Andrés’ research project will focus on the importance of green spaces for cooling in the city. As world temperatures increase we are also faced with more heat waves, even in Amsterdam. This means that people living in the city are more and more likely to feel the health effects of urban heating. Green spaces can help by providing cool places for city residents. However not everyone has equal access to urban green spaces. Low income households are, for example, more vulnerable to heat stress because they are less able to afford insulation or air conditioning in their homes.  Andrés’ research is aimed at identifying areas where residents may be more vulnerable to heat stress based on income and health and which different green space types they use when looking for places to cool down. He hopes that some more knowledge about this can help to inform urban development that can equally benefit all the city’s residents.

Marlon’s research project aims at analysing how Amsterdam’s citizens subjectively perceive different categories of urban green areas. To do so, he will categorize green infrastructure using satellite and Lidar data in the area Overtoomse Veld located in between Rembrandtpark and Sloterplas, Amsterdam. The aim of the study is to create a method to categorize urban green spaces and to find out which types are then perceived as ‘better’ or ‘worse’. The results will help answering questions like: ‘What value do shrubs along a road have?’; ‘What kind of vegetation pulls people into parks the most?’; and in general ‘What vegetation do people value in their urban green surrounding?’ The results of the study could indicate which types of urban green spaces are demanded the most and how urban development could improve supply of such areas. Further, the mentioned categorisation will be replicable and could be applied to various areas to enable equivalent analysis of urban green space availability. 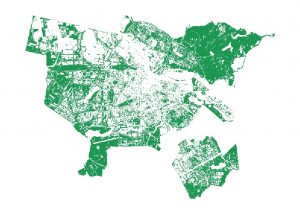